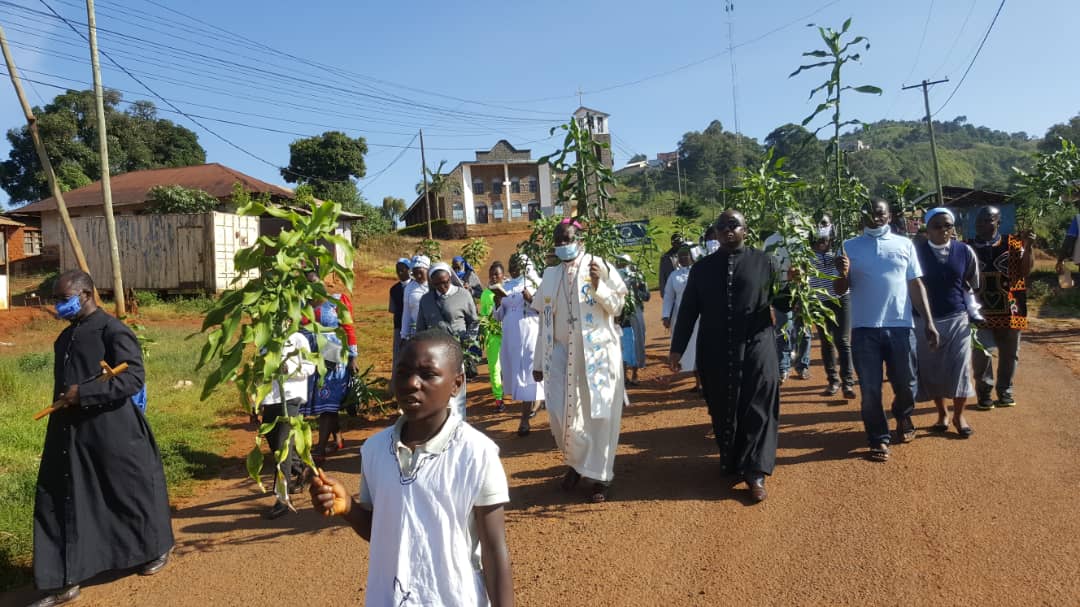 The people of the Diocese of Kumbo, together with their Bishop Mgr. George Nkuo took to their feet on Tuesday 20th October 2020, from their respective domiciles and Parishes to the Kumbo Cathedral in what was termed “A March for Peace”.

They marched to the Cathedral carrying peace-plants and reciting the Rosary. One intention led them all: Let Peace reign especially in Kumbo.

Meeting at the Cathedral, the Bishop blessed the pilgrims and together with them moved into the cathedral for the celebration of Holy Mass.

More than 2000 people gathered for the prayerful event, including non Catholic Christians and Moslems, in what later could be called an ecumenical and interreligious Occasion. In his homily, the Bishop gave a clear message and admonition: PEACE.

He called on all, of whatever political, social and Religious inclination to be peace lovers, peace promoters, peacebuilders and supporters of peace plans and strategies. He emphasized the prayer of the rosary as a sure means of victory, as had been the case over history. Peace, prayer and love were clearly earmarked as pertinent virtues to be cultivated and promoted in such very despairing moments.

Kumbo has been one of the most hard hit areas in the North West Region of Cameroon where an uneasy tension and crisis has been ongoing since 2016. In 2020 one can already remember the massacre of Ngarbuh and the heavy and rampant gun shooting and demands for ransom, not forgetting the threats to all and any who attempt to resume schools.

It is hoped that with God’s intervention and the collective/individual efforts, peace will be installed, and calm return.

It was also noted that on that same day, some pilgrims from their houses and parishes were stopped and prevented from joining the others at the cathedral, while some of the pilgrims who returned home after the Mass were taken to separatist camps were they were questioned, others were beaten and brutalized. The bells of the churches rang on Bishop’s order and priests from parishes around Kumbo with their people marched to where their pilgrims had been taken to. All were later on released.