George Nkuo was born on the 28 January 1953 in Njinikom, Boyo Division in the Archdiocese of Bamenda – North West Region of Cameroon. He did his Secondary and high school education in Bishop Rogan Minor Seminary, Small Soppo, Buea, from 1967-1974 where he obtained the General Certificate of Education, Ordinary and Advanced Levels.

He was then admitted in the Regional Major Seminary, Bambui, where he studied for the priesthood from 1974-1981. He completed his priestly formation in philosophical and theological studies with a Bachelors Degree in Philosophy in 1977 and a Bachelor Degree in Divinity in 1981 respectively.

He was ordained priest for the Diocese of Buea on the 26th of April 1981 at Small Soppo, Buea by the Right Reverend Pius Suh Awa, Bishop of Buea. He is of the second batch of priests trained in the present St. Thomas Aquinas’ Major Seminary, Bambui.

He did postgraduate studies in St. Patrick’s College, Maynooth, National University of Ireland (1989-1991) where he specialized in Education and obtained a Master’s Degree in the Science of Education. 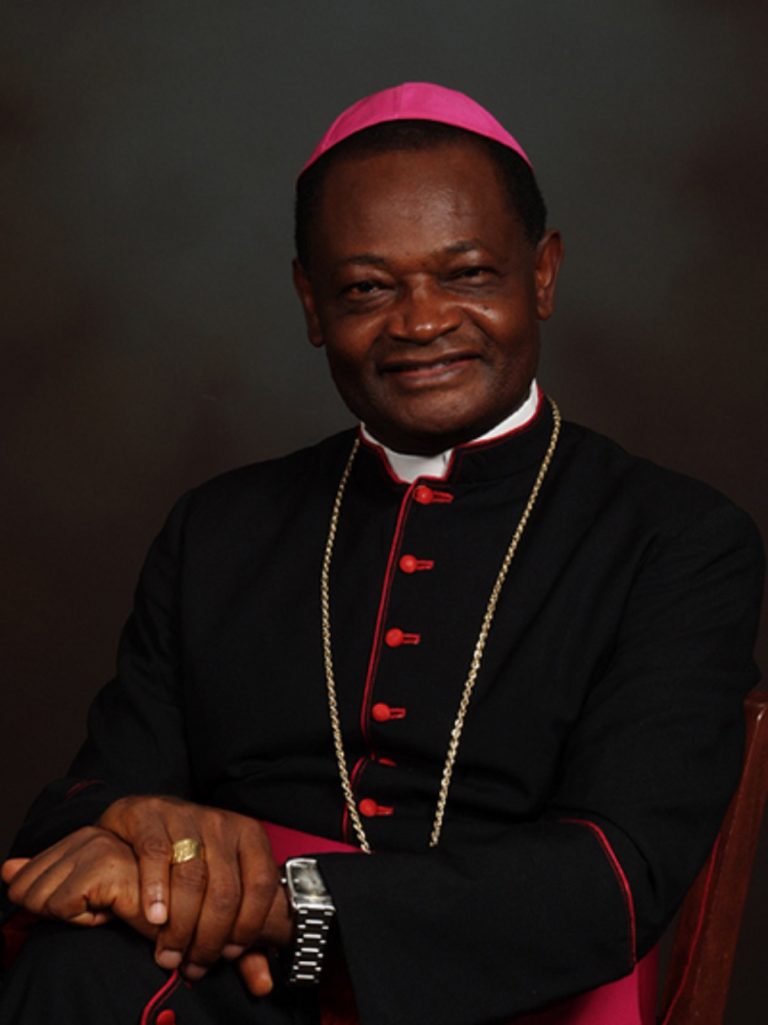 Previous assignments include Provincial Chairman of the Association of Diocesan Priests, Bamenda Ecclesiastical Province; National/Diocesan Chaplain of the Catholic Women’s Association. Bishop George was also Member of the Council of Cameroon General Certificate of Education Examination Supervisory Board, member of Presbyteral Council and College of Consultors of the Diocese of Buea.

He was ordained a bishop and installed as the second Bishop of the Diocese of Kumbo on September 8, 2006.

From the beginning of his episcopacy, Bishop George Nkuo expressed the hope that a Bishop’s responsibilities are first to the Diocese where he is ordained to oversee. This he makes visible in the way he is available to the Priests, Religious, Seminarians and Faithful in the Diocese of Kumbo. In his first meeting with his priests upon his appointment as Bishop of Kumbo, he insisted that the priests, his co-workers were to be seen as his main collaborators and emphasized on team work/collaborative ministry. Today, he recognizes the talents and abilities of the priests, religious, and laity and is ever more willing to work with them at all levels for the evangelization of the Church in Kumbo.

Bishop George is working very hard to build Catholic education, in the Catholic schools in the Diocese as well as in the religious education programs of the parishes. He has introduced the Catholic Education Week and the Bishop’s Education Fund which contributes in forming young people to become integral and holistic scholars. He is planning for the future construction of the Medical Department of the newly created Catholic University of Cameroon, Bamenda, and also carrying out improvements in the existing Schools in the Diocese.

One of the landmarks was the celebration of the centenary of the faith in the diocese of Kumbo in 2012. It was 100 years since the German Sacred Heart Fathers of St. Quentin arrived Kumbo. It was celebrated under the theme “We no longer believe because of what you told us” (John 4:42).

What is even more important for him, is pastoral plans, to be able to reach out to the people of God not only to preach the Gospel but also to be close to them in their needs is effectively being carried out. He has been trying to meet the Christians in their Parishes every year during pastoral visits and to set up little projects in the area of health and education to reassure the people of Kumbo and especially those in the remotest parts that they are not abandoned.

Most Rev. George Nkuo is the second residential Bishop of the Diocese of Kumbo. He was appointed by Pope Benedict XVI in 2006

Every year, the Bishop draws up a pastoral programme that runs from September to August, following the diocesan Pastoral Year.

The Bishop administers the Diocese with the help of the College of Consultors, Councils and Committees